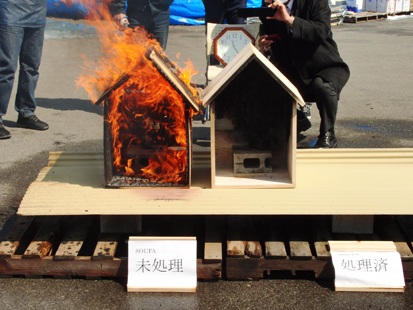 It is a matter that becomes a regular topic about fire prevention and fire prevention measures in the townscape preservation area.
We rarely ask our local government for inquiries. Not much, but …

In a preservation area with many wooden buildings, fire is a threat and one of the disasters that must be avoided to preserve history. Therefore, new construction and renovation of the area are subject to many restrictions, but not enough measures have been taken for buildings already built.

Temples, shrines and temples throughout the country were also late measures for fire prevention and arson measures.
It seems that it is responding by strengthening patrols as a software aspect, but as a hardware aspect, it is not considered that flame retardant treatment will be applied to the construction of temples and shrines. There are various issues involved.
What if you have a temple or shrine in the mountains without a resident at night? A fire broke out, and I think it was too late to witness a completely burned building in the morning.

There was a construction company that had received an inquiry before.
It seems that there was a plan to renovate an old private house and make it a restaurant, but it was instructed by the government to give permission unless the interior was made semi-flammable.
Cover all with plaster board … Then the meaning of the old private house would be completely lost, but the government had to instruct so.
The above seems to be happening all over the country and there is no clear solution.

The above case focuses on the presence or absence of a certification number, but we believe it is worthwhile to voluntarily promote flame-retarding of the wooden exterior walls of the townscape preservation area.
We have also developed weather resistant paints by mixing our soufa with natural paints.

There is a need for voluntary flame prevention and flame retardancy.